Viña del Mar is Valparaíso’s responsible and trend-conscious little sister working hard to come out from behind her older sibling’s über-cool shadow. Founded in the mid-nineteenth century, Viña’s growth spurt really only came within the last century as prime real estate; first for the country’s president, then the rich and powerful, and eventually everyone else. Development continues northward along the coast as demand increases. For the Llama and me, Viña has been a refuge. We threw ourselves headfirst into an unknown country and culture, and the beauty and chaos of Valparaíso tempted us like a burning flame. But the dogs don’t bark at night in Viña the way they do in Valpo.  There are less people, less crime, less trash, and more space to breathe.  The streets are laid out in geometric patterns; they are cleaner and wider and well marked so one knows where she is. There is McDonald’s and Ruby Tuesday and TGIFriday and KFC – not that we’ve been to any one of them. They’re there though: familiar corporations that make sense to our North American brains in a place where we sometimes feel like we’re standing on our heads. 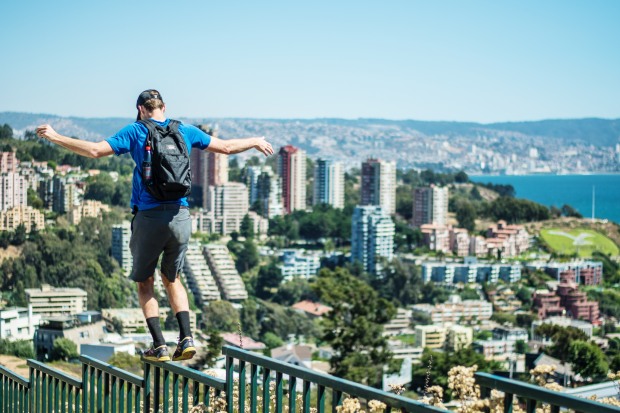 Where am I? I am living in the neighborhood of Jardín del Mar, in the area known as Reñaca, in the city of Viña de Mar, in the province of Valparaíso. It is a place where I feel safe, and a place I feel grateful to be.

Magazines and guidebooks often refer to Viña del Mar as a resort town.  The idea that the word “resort” conjures for me doesn’t quite describe the place I’m familiar with.  Yes, it is a city set upon the sea.  There are a few hotels and spas dotting the coastline.  But they aren’t brand new and antiseptic looking, and they aren’t large and sprawling. They’re a little shabby, at least from the outside. I haven’t spent time inside them; the temptation has not been great.

Often when the Llama and I are on a mission to run errands or purchase anything – be it a plastic tarp or peanut butter or a glasses repair kit – we find ourselves in downtown Viña. Plaza Viña and Avenida Libertad mark the commercial center with malls and office buildings, interspersed by stately buildings and parks.  The Fonck museum, Teatro Municipal, Casino and Hotel O’Higgins set a tired ’30s vibe that aspires to swanky. There are low bridges elegantly crossing a riverbed that appears to have dried up in the past few years, now used for alternative city parking.  Teens populate the plazas, making out and snapping selfies in their ties and pleated skirts. The metro is clean and new and efficiently connects Viña del Mar with the port of Valparaíso and surrounding small towns and villages.

All of the casual and cool beach town vibe that downtown Viña lacks is found in Reñaca. Surf shops and sushi restaurants vie for attention along the waterfront with colorful signs in English catch phrases. Kiosks selling fresh fruit and sunglasses pop up on the esplanade on sunny days.  A designated running and biking lane along the beach was crowded in January and February, but now it’s only used by Marineros and the Llama.  In Reñaca every day we used to see bathing beauties drinking mate and listening to reggeaton while peddlers called out selling clothes and beverages and candies.  Now the wide sandy beaches carry only the sound of waves crashing and seagulls calling. 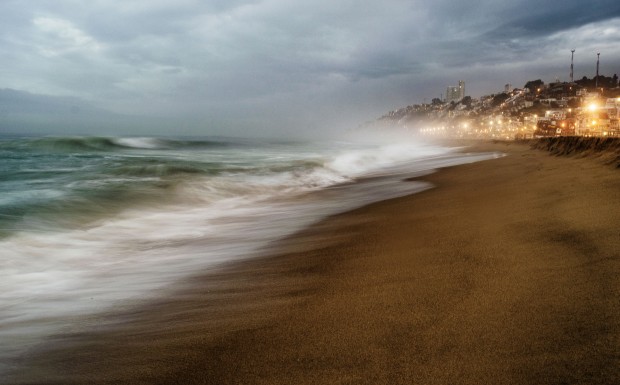 The anxiety that arose when navigating new neighborhoods or hunting down an unknown business has dissipated.  It helps that many of the pickpockets who follow wealthy summer tourists to this beautiful coastal oasis crawl back into their dens with the arrival of cool and cloudy fall weather. Since the beginning of March, if I’m headed somewhere new, I get as close as I can on my own and then ask for directions.  Instead of plugging every address into my phone, I can trust other human beings to point me towards my destination. I had forgotten how pleasant the act of giving directions can be; starting work in a local hotel reminded me.

These days, I check off the street names in the Jardín del Mar neighborhood as I trudge uphill  – Valonia, Talasia, Rodimenia, Petalonia, Liagora, Laurencia, Lesonia: each one named for a different type of seaweed.  The sea breezes and ocean views charm the steep incline to where we hang our hats.  Two friendly golden retrievers, Chofa and Chofo, wag their tails and whine until we enter the gate, eager for a scratch behind the ear. As much as I wax poetic about Valparaíso, I have to credit Viña del Mar for being my home away from home.

Marineros: The home of Chile’s Naval Academy and Hospital is located in Valparaiso and Vina del Mar.  We often see marineros, or Naval sailors, in uniform in both locations.  Many of them are quite young, 16 or 17 years old. The Llama has been teaching two different classes of marineros at the academy for the past month, and has found them to be respectful, intelligent, and eager to learn.

4 thoughts on “Feeling at Home in Viña del Mar”